My current writing focus is Charles Burnett’s film Killer of Sheep, shot in South Los Angeles in the early 1970s as part of his UCLA School of Theater, Film and Television Master’s course, and remastered and released commercially for the first time in 2007. Part of the ‘L.A. Rebellion’ school of filmmakers, or the ‘Los Angeles School of Black Filmmakers’ (Ntongela Masilela), Burnett collaborated with many of his peers in the UCLA programme, including Haile Gerima, whose Bush Mama (1979) is the third work analysed in this chapter of my thesis. Of the L.A. Rebellion filmmakers, Burnett has probably had the most ‘successful’ career in ‘mainstream’/Hollywood terms, insofar as he went on to direct several films featuring recognisable stars: To Sleep with Anger (1990), starring Danny Glover, and The Glass Shield (1994), featuring Ice Cube.

Killer of Sheep is a deceptively gentle and dreamlike depiction of African American family life in early-1970s South LA. It has minimal plot, with none of the hard-boiled urgency  of Chester Himes’s If He Hollers Let Him Go, which I’m looking at alongside Killer of Sheep in my thesis. That it lacks obvious tension is not to say that the stakes of the narrative are not high, although I think the film’s tone threatens to obscure this on a superficial reading.

Stan (Henry Gayle Saunders), the slaughterhouse worker and eponymous Killer of Sheep whose job supports his wife and two children, is a depressed insomniac who is emotionally and sexually distant from his partner. The film’s episodic structure depicts a series of small defeats experienced by Stan’s family and their acquaintances: an abortive attempt to purchase a second-hand car engine; an trip to a racetrack outside the city ended by a flat tire; an anxious Stan finding spurning the affection of his wife (Kaycee Moore) as they dance to a Dinah Washington record. 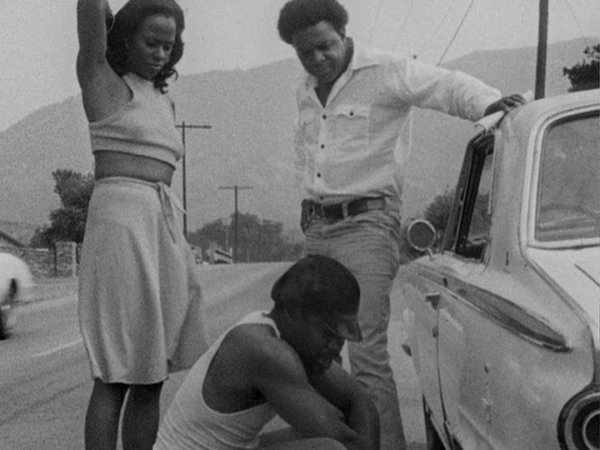 The film’s most obvious trope is what could be termed stasis or immobility; what I’m inclined to frame as arrested movement. Stan’s depressive state appears to manifest itself as a kind of stasis. Tired on a Friday evening after a day at work, he tells his wife he needs to find a different job, but there is nothing in the film to suggest that he has any motivation to seek one out, nor that there are obvious opportunities open to him. Early in the film, he seems hurt when his friend Bracy mentions they passed Stan’s home whilst wandering the streets, but didn’t call on him.

Stan: How y’all been doing, man?

Bracy: Walking the streets all night. We passed here about three o’clock last night, and saw the lights on. We decided to keep on stepping.

Insomniac Stan, then, is left suspended and immobile whilst his friends ‘keep on stepping’.

Killer’s images of arrested movement are not confined to Stan alone, however – rather, they are prevalent enough to suggest that the precariousness of mobility is a central concern for all of the film’s characters. We see young boys, including Stan’s son, throw rocks at a freight train that speeds past the wasteland in which they are playing. Later, one boy of the boys will swear at a group of girls in an alleyway blocking the path of his bicycle; the girls don’t hesitate to respond by pushing and kicking him off his bike, and he walks away crying without it.

In some key scenes, Stan is present and partly involved as others fail in their attempts to maintain or improve their mobility – as, for example, when Eugene enlists Stan’s help to buy a second-hand engine, and then loads the heavy engine carelessly and precariously on the back of his truck. The engine is dislodged and drops onto the street the moment the truck begins to pull away from the curb – the mournfully slapstick punchline to a scene in which Gene and Stan have struggled awkwardly to carry the heavy engine down from a first floor apartment and then up onto the bed of the truck.

There are many more moments, whether prominent or subtle, where mobility is problematic or fails outright. And there is a clear analogy suggested by all of these images of arrested movement – physical (auto-)mobility as a metaphor (or perhaps rather metonym) for a socio-economic mobility. This is reading that Burnett’s script certainly supports:

Brady: What do you want another raggedy-ass car for, huh?

Eugene: Trying to get ahead, man.

Arrested mobility as socio-economic analogy; arrested mobility as psychological symptom or effect. Explicating the relationship between these two readings of Killer of Sheep is my objective in the thesis section currently taking shape.